It was barely past 7am on a recent Tuesday morning when my phone began to blow up.

First came a photo of Cole and Clay from my dear friend, Ann.  The caption read, “Grab the Kleenex…it’s going to be the year of Lasts!  The last day our boys will go to school together!  Send pics.”

Then, the adorable Chris sent her shot of Rhett and Rhye.  Her senior looked half asleep, but still handsome.  Her caption read, “Uuuugh.”

That was followed up by an adorable side by side of her son, Christian, that would just melt your heart.

A few moments later, “Kleenex needed all day” arrived with a smiling photo of Dominic with his big brother Vinny, from my friend Julie.

I quickly gave into peer pressure and then the morning’s “Last first day” shot of my two oldest. I wrote,  “Let’s just enjoy them all year.” 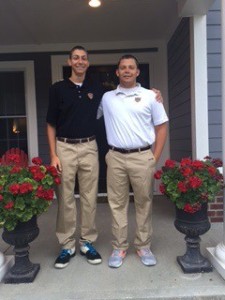 Drew and Nick on the “Last first day”

Look at me trying to be sunny!  It didn’t last.  Within two hours I had texted my mom, “Can you just sprinkle a little Prozac in my all my beverages this year?”

I felt a bit like a mom cliche.  I know, it’s silly, and I realize how much God has blessed our family.  Still, there was this wave of sadness, of thinking so wistfully about the last year with Nick under our roof.  God’s grace is sufficient, I thought.  I followed it with, “whatever.”  Then, I found this golden nugget.

Those to whom God gives riches and property, and grants powers to partake of them, so that they receive their lot and find joy in the fruits of their toil:  This is a gift from God.  For they will hardly dwell on the shortness of life, because God lets them busy themselves with the joy of their heart.  Ecc. 5:18-20.

A couple of weeks ago, a friend of mine lost his dad in a tragic accidental drowning.  It appears to all that Mr. Doerr was cleaning the pool when he apparently got tangled in the vacuum hose, hit his head and fell into the pool.  I lost my breath a bit when I read the note I received which laid bare the details, and I imagined the deep grief of the family.

What Fr. Richard reported the day of his father’s funeral was this, which I read on my phone in a bit of disbelief.  He wrote, “It was an absolutely beautiful thing.”  There was no “but”.

His simple words spoke powerfully about his strong faith and grateful heart.  It convicted me instantly, but I didn’t quite understand why just yet.

A year ago, I lost my friend, Shannon, in horrific fashion.  In the midst of their terrible grief, her sister, Colleen, and husband, Doug Stine, adopted the two sons she left behind.  They are being raised alongside the little Stines, Ryan and Maddie…and a brand new baby girl born just days ago.  They named her Shannon Lynn.

I sent my grieving friend, Fr. Richard, this photograph.  It was the moment when Colleen introduced her parents and her older sister, Janet LYNN, to their newest family member.  When I saw it for the first time, I sobbed.

I explained to him that it was one of the most poignant photos I have ever seen and that it was of the O’Malias.  Mom, Dad, and their two daughters– in the delivery room– meeting Shannon Lynn, who is named after BOTH of her aunts.  I told him it was so stunningly beautiful that I can’t stand it, and that it was, to me, a powerful example of God’s grace just reigning down on them.

They say a picture is worth a thousand words.   So I won’t write about it anymore.  Here it is. 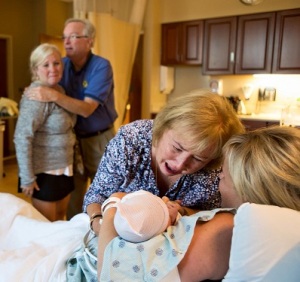 To that, the reply I received from the good padre was a link to the homily given by Fr. Rasner at his dad’s funeral.  I thought that was a bit of an odd thing to send but given that I was out of town on vacation during the funeral and regretted missing the event, I was glad to get the chance to hear it.

To say that it was powerful and comforting would do it a massive disservice.  It was perhaps the most beautiful and inspired funeral homily I have ever heard.  The Doerr family is a large and faith filled group which has produced two priests.  The younger Fr. Doerr shared this with me because he recognized in that homily what I felt when I saw that photo.

God’s grace reigns down on us.  It happens all the time in small and powerful ways.  It’s our choice to see it.  We have to cooperate with grace, you see.  When we do, the only appropriate response is gratefulness.  The Doerrs and the O’Malias have provided me (and many, others) inspiring witnesses of faith and gratefulness amid terrific difficulties.  They have given me pause.

Why, oh, why is gratefulness NOT my default position at this point?  I really MUST be the most stubborn, slow learner of all times.

Let’s circle back to my pitiful morning of angst at the realization that this is Nick’s SENIOR year.  It’s the year of lasts.  Sniff, sniff.  Perhaps the storm clouds and film noire attitude is not the way to go?  A little melodramatic– you think??

This is just one small example and one tiny situation.  However, it’s definitely emblematic of an overall spiritual shortcoming.  It was the O’Malias and the Doerrs that inspired me to visit Jesus.  I prayed, “I don’t know what I need, Jesus, but You do.  Please help me.”

As I prayed, I got thinking about the proper way to handle this year (and my life, and my failings), and then I kept thinking of this crazy, over the top guy we met this year on the baseball field.  “Why am I in the chapel thinking about Skiles Test baseball,” I thought.  “Girl, focus on what you’re doing,” I scolded myself interiorly.

I couldn’t.  That’s when I realized God was talking.  Duh.  When people get “stuck” in my brain, I tend to spiritualize the experience.  In other words, I believe the Holy Spirit is behind it and has placed them there for a reason.

What can I say?  Some holier people probably hear angelic choirs when they pray, or at least think of cool biblical guys.  I tend to go another way.

Stick with me, and allow me to digress….

“They may forget what you said, but they will never forget how you made them feel”  — Carl Buehner

Coach Bazan is a lunatic.  No, really, he is.  So is his wife, Coach “Ball.”  Her name is actually Crystal, but everyone calls her Ball.  Really.  She brings bags full of gum and miscellaneous candy to every practice and baseball game.  Sure, it’s just little league baseball, but still…and she video tapes every game.  Why?  So she can send video clips to parents of their kid’s great hit, or awesome catch and enjoy it or send it to a grandparent who lives afar.  Coach Ball only sends highlights.

“We gotta call him ‘All American Thieme’ momma, because that is what he’s gonna be someday!  I was so excited when we got him on OUR team this year because I am sick of playing against him!  He hit 7 for 7 against us last year!”

Those were the first words spoken to me this spring by Coach Bazan about my 10 year old son, Zach.  All I could think was, “Good God!”  Who knows the stats of players from the opposing teams?  From last year?  I don’t think I am ready for this guy.  And do you know what?  I WASN’T!

Before we knew it they all had nicknames. There was “Lights Out Ferrucci” and “Hitman Haas.” He named “Gotcha Goff”, “Max the Rock Johnson”, “Mr. Excitement”, “Tough as Nails Bartlett” and “Lightning Baltz”. We will never forget “Irish Padgett” or “Hammer Hardister.” It was kind of hilarious how the boys beamed when he called them by their awesome nicknames……….which was constantly!

I have to be honest. I don’t know much else about this family but for sure I know one thing. They taught me a very important lesson. That lesson?

Life is an amazing gift. Live it—in positivity, with gratitude! My heart is so often overflowing from amazing blessings. When God reigns down on us, He intends for us to SOAK IT UP, and then… drip sparkly little bits of joy all around us.  I do feel a tremendous amount of joyfulness. It’s time for me to take a cue from the terrific Bazan family and shake that sponge a little harder.

There is a time for nostalgia, for pining over how fast the time has gone, and if all goes as it should, there will be an entire box of Kleenex utilized when I drop my oldest son off at college next fall. But, I don’t need to make it the longest, most painful separation song in history. Brooding is a colossal waste of time—whatever the crisis of the moment.

Now is the time for gratefulness and generosity of spirit.  Now is the time to honor God and the amazing family, friend and community He has given me with my joyfulness!

Those to whom God gives riches and property, and grants powers to partake of them, so that they receive their lot and find joy in the fruits of their toil:  This is a gift from God.  For they will hardly dwell on the shortness of life, because God lets them busy themselves with the joy of their heart.  Ecc. 5:18-20.

God deals out joy in the present, the now.  He also reigns down His love on us through others.

For me, He has most recently spoken through the beautful witnesses of the O’Malias, the Doerrs and the Bazans, To them, and to God, I am grateful.  Candles have been lit and prayers said for these families with a full and thankful heart.

Has anyone loved you up in a meaningful way lately by their example of faith or their kindness?

Yeah, that was God.

Then, shake that sponge, folks!