“His hemoglobin is at 7?  What does that mean?”

“Well, as you know he threw up blood, and his numbers being what they are….what we know is that he is bleeding.”

“So what course of action are you thinking is needed, Doc?”

“We’ll do a blood transfusion, give him 2 units of blood, then look at the numbers again.  If he vomits again in the meantime, we will need to send him by ambulance to Kalamazoo.”

Barbara and I glanced at each other and then back to her brother, (my father-in-law) Tom.  He was conscious but so weak and lethargic that his few words were breathy and his eyelids were impossibly heavy.  We were both worried.  She excused herself to go home and call Tom’s twin sister, Josephine in Chicago.  I stepped outside to talk to the doctor.

“We’ll hope that he can stabilize after we do the transfusion, but I would say there is a more than even chance we may need intervention tonight that I am not qualified to handle.  You need to prepare yourself for that possibility.”

I called my husband out of his meeting and let him know that a 3 hour drive from Indy to Michigan was NOW in order.  I followed that up an an SOS to my parents.  My three boys were left managing alone.  We needed Grandma Kate or Grandpa Jim to stop what they were doing, making a spontaneous road trip to solve that.  I sent a quick text to my oldest Nick, 17, to explain the situation.  I knew he could manage for a while.  He has a car, and he is a responsible kid, and he would watch out for Drew and Zach until arrangements could be made.  Then, I headed back upstairs to room 245 at South Haven Community Hospital.  I said a quick prayer to God to keep my whole family safe and provide me a clear mind and peace of heart.

It was a long day and night Tuesday and even now the medical struggle continues to unfold.  I was there on watch for my kind hearted and very ill father-in-law for three days, and I came home last night.  My sister-in-law, Mary Jo, replaced me and is now in charge of white blood cell counts and hemoglobin numbers.  Serious illness causes chaos for the patient, as well as their family.  Of course we wouldn’t be anywhere else, we love him and want to be there.  If you have lived more than two decades of life though, you have likely been in the midst of a similar circumstance at one time or another, so you will understand.  So, we pray and we do our best. 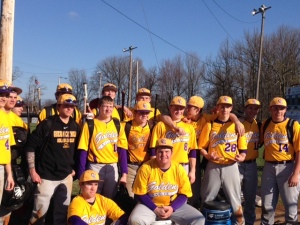 Here’s the thing.  God is so good to us.  We ask, and invariably, He scoops us up.  He finds a way to show Himself to us if we are paying attention.  Let me tell you about our God “wink” from Tuesday.  It came courtesy of the Guerin Catholic High School Baseball team.

While his parents were a state away worried sick over Grandpa Tom, our oldest son Nick was at baseball practice.  Remember, he now knew that he was (albeit temporarily) in charge of his brothers.  On his way out to the field, he looked down at the lanyard which carries his car key, only to discover that while the key fob was there, the key itself had fallen off and vanished.  Imagine how he must have felt?  He is concerned about his grandpa who is gravely ill.  He is responsible for his brothers.  His car is now of no use to him and there is no way to get another key without having the car towed to a dealer.  Did I mention he has no credit card?  No checkbook?

What can he do?  He has no choice.  He starts retracing his steps.  He is looking back and forth from his car to the baseball field and back again.  His buddy, Cole, sees him and beings helping him look for his key.  Then, Cole goes and solicits the help of a couple of others.  No luck.  Word spreads that Nick has lost his key and before long he looks up to discover that the ENTIRE GC BASEBALL PROGRAM is scouring the ground for his key.  Guess what?  After several minutes pass and Nick has headed inside to make sure no one turned it in to lost and found….in the grass, on the ground, the key is FOUND!  It’s not a small search area.  Truly, it was like finding a needle in a haystack.  WHEW!!

I have no doubt that Nick was teased mercilessly about losing his key.  Probably, he will not live it down.  I promise you from the palpable relief in his voice as he recounted the story, he doesn’t mind a bit.  Do you know what else?  Those kids and those coaches HAD NO IDEA how important it was on that day, for that kid that his key was located.  They could just as easily have ignored Nick and his lost key.  That’s not how they roll though….and that’s what makes it so awesome!  They were just doing what they do.  They were being kind, living examples of Christian community.

Had it been a normal day, he could have phoned me for backup.  Or Dad.  Or Grandpa.  On TUESDAY, Nick Thieme just needed his key.  Period.

So, later, after he had picked up dinner for his brothers and things had settled down, Nick shared his story with me which I stood in the parking lot at that hospital 3 hours north of him to check in.  He said, “Thank GOD Mom!  Kyle found my key.  I almost added to the crisis.  Oh my gosh, I was so relieved!”

I am not going to lie.  Tuesday was DEFINITELY in the “Not Top 10” for the Thieme family.  BUT, if we are people of faith, we have to decide.  We have to decide to trust God and His plan for our lives and CHOOSE to see Him loving us even during times of trial.

“Therefore, everyone who hears these words of mind and puts them into practice is like a wise man who built his house on rock.  The rain came down, the streams rose, and the winds blew and beat against the house; yet it did not fall, because it had it’s foundation on rock.”  MT 7:24-26

So, GOD IS GOOD.  He used young hands, feet and EYES of the Guerin Catholic baseball family to let us know He is here on a colossally crummy day, and He loves us.

Golden Eagles hear me.  THANK YOU for being the face of Jesus to our family this week.  There are high calorie desserts in your futures, courtesy of the Thieme family.  They will be behind the dugout on a night you least expect it!